The 2007 Speight's Coast to Coast saw two top competitors participate in the Two Day Individual Event, namely Laura Thompson (representing Northern Ireland, via Australia) and Kieran O'Neill from Invercargill. Laura and Kieran undertook months of training to get themselves ready to participate in the multi-sport, endurance race which is conducted in 4 stages as participants traverse from Kumara to Christchurch via, foot, bicycle and kayak (243 km in total).

They were more than ably assisted by their support crew of Claire, Mel, Mich, Sabine and Sal who did not do any training but were thoroughly exhausted at the end of the race!

The event started in Kumara with registration, a banquet dinner for 2000 and briefing by race organiser Robin Judkins (a personality in his own right) on Thursday 8th February 2007. The team was fortunate enough to sleep in comfortable accommodation supplied by Barry and Sarah (thanks guys) who understandably did not get up to see us head off at 5.00 a.m. on Day 1 of the race.
Kieran and Laura had to set their bikes in place before walking down to Kumara Junction for 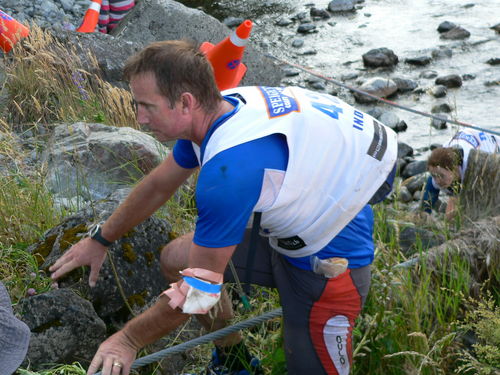 the race start. They started at 7.00 a.m. with a 3 km run to their bikes followed by a 55 km bike ride over the mountains to Aickens for Transition 1. Bikes were quickly whisked away, clothes changed, injuries assessed, fluids and food consumed before they set off on a 33km 'run' up the mountains where they clambered over boulders, ran through 5 river crossings, followed goat tracks and finally ran exhausted to the finish line for day 1 at Klondyke Corner. injuries were again assessed, medical treatment sought, massages enjoyed and speed scrabble learnt in our home for the night at Arthur's Pass.
Sal, Claire and Sabine had a far too early start on Day 2 , rising at 3.30 a.m. in cold, rainy conditions (this was never mentioned prior to agreeing to being part of the support crew!) as they headed off to Mount White bridge to drop the kayaks off. In the meantime Mel and Mich got the racers fed and down to Klondyke Corner for the 7.30 a.m. Day 2 start. A 15 km bike ride, followed by an 800 metre run - carrying the bike mind you - got them to the kayak transition, where they eagerly changed gear again and raced off on the 67 km paddle section of the race down the Waimakariri River.
The final transition took place at Waimakariri River Gorge Bridge where they wobbly left their 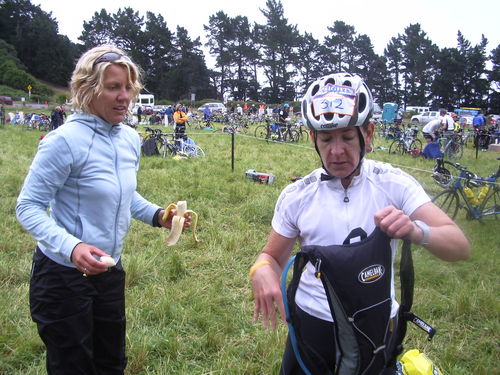 kayaks after a 5 - 6 hour paddle (all Laura could say at this stage was "I didn't fall out of the kayak") and then had to run up a very steep hill (none of the assistants could keep up with them and we hadn't done any exercise that day!) where they dumped their wet clothes for the final stage of the race a 70 km cycle to Sumner Beach. The support crew raced to load the kayaks and gear and hit the road in order to get their in time to see them finish.
How proud we all were to see Kieran and Laura cross the finish line and be greeted by 'Juddy' with a commemorative can of Speight's beer and a medal. What an achievement for both of them and so inspiring for us all to watch. It was a real honour for all of us to be part of the support crew for Kieran and Laura and just to see the many other participants reach their personal goals.
CONGRATULATIONS LAURA AND KIERAN ON A RACE OF A LIFE TIME! 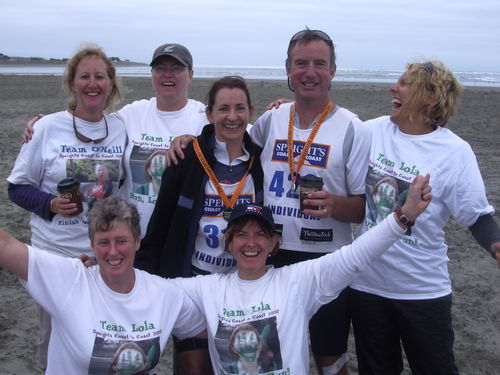 There are lots of photos to be viewed in the photo gallery and for full details on the Coast to Coast race and results - Laura's race number is 312, Kieran's 420
< Prev Next >